If you have been following HFM, you know that I wanted 2012 to be the year of my first marathon. While my knee is feeling great, I don’t think it’s going to happen. With 2 months left in the year, my options are pretty limited for marathons in New England. I know there are lots of options around the country but my travel budget is depleted right now. So I’m looking ahead to 2013. 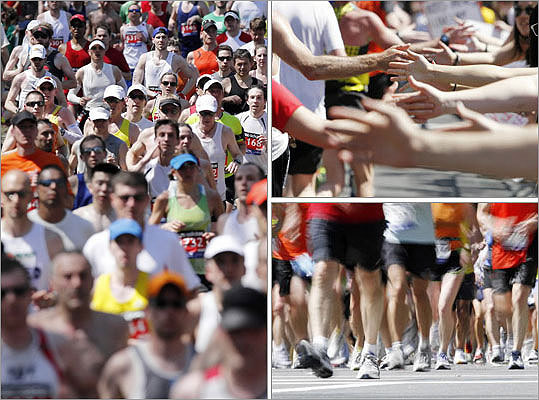 I’m toying with the idea of running the Boston Marathon with a charity. One of my coworkers is too. Fundraising is steep with a minimum of $4000-5000 for most charities. Question for any of you who have raced with a charity – How difficult is it to raise money? I’m assuming it’s very hard. Our economy is horrendous and people aren’t in the giving mood. I really don’t want to fork over $1000 or more of my own money to make up the difference. I know it goes to a good charity but that’s A LOT of money! Any tips or thoughts would be greatly appreciated!

Last week, someone posted on my local running group’s Facebook page this question:

Is anyone interested in running a Spring/Summer/Fall marathon in 2013? If so, which one? I’m open to any ideas!

Hmmmm…that got me thinking. If money were no object, where’s my dream marathon race location?

2. Chicago – I’ve heard nothing but good about that race. Plus, it’s another THE race.

3. Big Sur – Any race that has views of the ocean is on my list.

4. Humboldt Redwoods – Running on the Avenue of the Giants? Now that would be breathtaking!

5. Nike Women’s Marathon – This just happened over the weekend and I’m bummed I missed it. Tiffany necklace and chocolate? No brainer, right?

6. Grandma’s Marathon, Duluth MN – I went to school in Duluth. The town just buzzes with excitement around the marathon. I’d love to go back to get in on the buzz. It’s not the most glamorous race but it would have special meaning to me.

International Races – Places I’ve never been so maybe I should just do a Race-cation and then take in the sites?

1. Reykjavik, Iceland – There’s something about Iceland that I find really interesting. It’s not the weather, that’s for sure. 🙂

4. Venice, Italy –  A chance to visit a part of my heritage.

Where would your dream race be? Have you done it yet?

38 comments on “Where’s Your Dream Race?”

With yet another all day rain here, I thought I’

Max can’t be distracted with taking photos. We

I'm an ACSM Certified Clinical Exercise Physiologist and RRCA Running Coach, who has a love of all things running, yoga, and fitness. I like to experiment in the kitchen and share healthy recipes for the whole family. Join me as I navigate life as a Happy Fit Mama!